Welcome to the launch of Gunning 4 Israel, the new blog which provides a fresh perspective on UK perceptions of the Middle East.
It would be fair to say that the prevailing public opinion in the UK would be hostile to Israel and sympathetic to Palestine. This blog was born out of a concern that this may be broadly due to ignorance.
Many people in the UK just don’t know the historical facts. Of course, the Israel-Palestine conflict is complicated and many facts are contested. The broad brush-strokes, however, are beyond dispute. It is shocking, for example, how many people in the UK assume that there was -- first of all -- a Palestinian state, and then an army of colonialist Jews invaded, expelled the native population and set up Israel.
Nothing could be further from the truth.
Jews settled in Palestine legitimately before the establishment of the State of Israel, purchasing land and living (to start with at least) harmoniously with their Arab neighbours. This was no soverign Palestinian state, more a piece of land which was largely desolate and home to nomadic tribes and villages. In 1948, the UN established Israel based on the principle of self-determination, whereby areas with an overwhelmingly Jewish population would be formed into a new State of Israel. But the Arab world, under the influence of rabid anti-semitism, immediately attacked the fledgling Jewish state with overwhelming force. (Haj Muhammad Amin al-Husseini, Grand Mufti of Jerusalem and the de facto Palestinian leader, had been a close confidant of Hitler during WWII and sought to import the Final Solution to Palestine.)

Let’s be absolutely clear: it was the Arabs who violated Israel’s borders by launching an unprovoked war. They were defeated, and beaten back into their own territories. In 1967 they regrouped and again attacked Israel, starting another unprovoked war. Again they were beaten back, and this time Israel took even more territory than before. The same happened in 1973, when Israel once again effected a resounding victory. This time, however, it was a closer-run thing: one in three Israeli young men were killed in that war.
So it was never the Israelis who violated internationally recognised borders and waged war on their neighbours. It was the Arabs. It just so happened that their plans blew up in their faces.
These facts are undisputed, and give a rather different lens through which to understand Israel’s attitudes today. Considering how many times Israel has been subjected to unprovoked, large-scale, racist genocidal attack, Israel is understandably reluctant to hand over territory that would prove strategically important in the event of future wars. Moreover, it is understandably difficult for Israel to trust the "peace process" when the Arab states continue to demonstrate racist hatred and hostility for Jews everywhere. (Even in Jordan, for example, a relatively moderate Arab state, the Holocaust is forbidden to be taught in schools.) As an illustration of this, consider the recent example of Gaza. Israel unilaterally withdrew from the territory, returning it to the Palestinians. How did the Palestinians respond? With continual rocket attacks which, after some years, provoked Israel into launching Operation Cast Lead.
A second area of ignorance among the UK public is a rather more subtle one. It is an ignorance of what it is like to be a democratic country living under existential threat.
By way of illustration, consider Britain during WWII. To begin with, Britain played by the rules, only bombing civilian targets. When it sunk in that we were fighting for our lives, however, our attitudes radically shifted. On February 14 1942, Bomber Command was instructed that military targets were no longer the priority, and bombing was to be “focused on the morale of the enemy civil population.” That is, we Brits explicitly turned our guns on civilians.
This is unthinkable to us today, but only because we live in peace and security. What it illustrates is that when high-minded democratic countries find themselves with their backs against the wall, their principles become rather more flexible.
Is it not hypocritical, then, to judge Israel’s actions from the point of view of a country that experiences no existential threat? To criticise Israel while sitting at home in a country where people are not blown up in the street, and where missiles never fall?

G4I is not suggesting a moral carte blance should be offered to Israel to carry out any and every action it likes in its defence. Far from it; a moral standard should be applied even in the heat of battle. But this must be pragmatic, not abstract. And it must appreciate the level of threat that Israel faces each and every day.
If the UK was in the same position -- based on our record -- how would we behave?
Food for thought.
G4I over and out.
Posted by Gunning for Israel at 03:22 No comments: 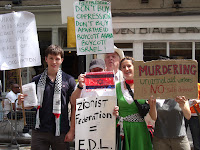 Hi. I'm G4I, a broadcaster and journalist. I write for all the major newspapers, and make programmes for BBC Radio. Welcome to the preview of my new blog, Gunning for Israel, which will be officially launched on 01.01.2011. Here are a few reasons why I decided to create it.

It seems to me that there are two fundamental points that are ignored in the public debate. Firstly, Israel is the sole democratic country in a region dominated by brutal dictatorships. If any liberal westerner emigrated to these dictatorships and attempted to exercise the right to freedom of speech, religion and other human rights, they would probably be murdered (in Israel, however, they would be welcome).

This is demonstrated, in fact, by the second point, which is a historical one: it wasn't Israel that violated the UN borders and invaded her neighbours. It was the Arab states. These countries invaded Israel in the three defining wars of her history (in 1948, 1967 and 1973), with the aim of driving the Jews into the sea and seizing their land forever. On these three occasions, Israel was fighting defensive wars against superior powers bent on genocide. It so happened that, despite the odds, Israel was able to emerge from these conflicts victorious and beat her enemies back into their own lands, which resulted in those portions of territory -- strategically important territory -- falling under Israeli control.

This history is so commonly de-emphasised in the mainstream UK debate that most members of the public remain largely unaware of it. A common misconception is that the Jews invaded Palestine, drove out the indigenous people, and set up their own country there. Nothing could be further from the truth. But this is the narrative that has become popular folklore.

This should be seen in the context of the evolving foreign policy of the coalition government, which is distancing itself from Israel in order to curry favour with the oil-rich Arab states. Of course every country must act in its own interests, but this move -- which puts financial concerns at the heart of foreign policy -- seems particularly cynical. (So much for rich Jews having all the power.)

So this is why I decided to set up this blog. I have no agenda other than to put a fair, frank and thorough case for Israel to the UK public. Thanks for tuning in, and I look forward to launching the blog in earnest come January 1st.

G4I
Posted by Gunning for Israel at 01:04 No comments:

Gunning for Israel
G4I is a collection of UK journalists specialising in the Middle East. We have come together to offer a different perspective on Israel and Palestine. Contact: gunningforisrael@gmail.com